● The theoretical position of the datum plane of the conical external thread of the American general sealing thread is located in the plane that is perpendicular to the thread axis and has a datum distance (L1) from the small end (datum plane);

The maximum deviation of the axial position of the reference plane of the American-made general sealing taper thread is -P~+P;

The minimum effective thread length of the U.S. general seal tapered male thread is not less than the actual diameter of its reference distance plus the assembly allowance.

The minimum effective thread length for general-purpose sealing threads made in the United States is at least the deviation from the reference plane position plus the basic dimension of the reference distance plus the assembly allowance;

For example, the size code is 4, and the left-hand American universal taper pipe thread is: 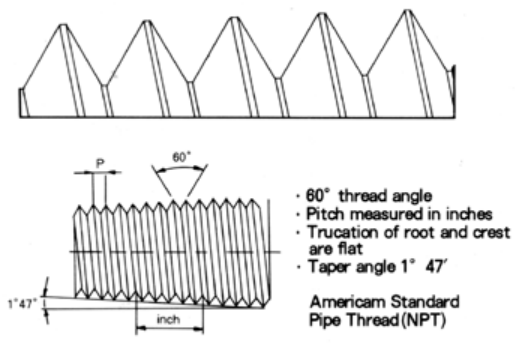 PT (BSPT) thread <British Standard Pipe Thread> is the abbreviation of Pipe Thread. Pipe thread with a 55degree sealing angle. It is the Wyeth thread. Mainly used in Europe and the Commonwealth of Nations. Usually used for water and gas pipes. The taper is 1:16, see the national standard GB/T7306-2000. Also known as ZG. 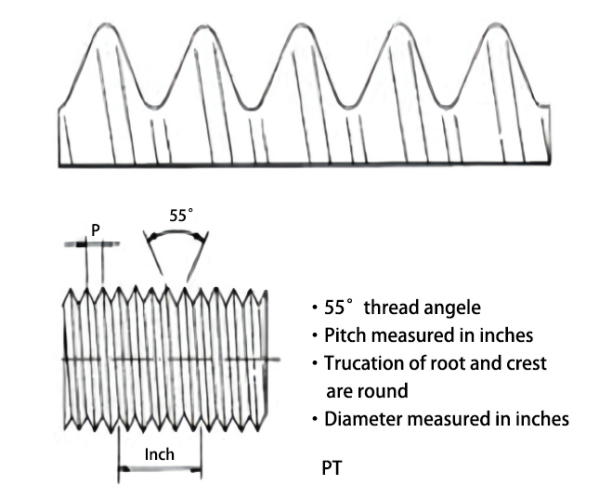 G is a 55degree unsealed pipe thread, which belongs to the Wyeth thread family. "G" stands for the cylindrical thread. See GB/T7307-2001 for national standards.

Joseph Whitworth, the inventor of the Wyeth thread, established his own machine tool factory during the wave of the British Industrial Revolution. Various thread factories, due to the lack of a unified thread standard, manufacture threads according to their own experience, resulting in different size ranges. The result is that it is difficult to interchange threaded parts. After replacing the screws, the screw holes in the same position on the same part may not be locked tightly.

As production continued to expand, Whitworth realized this serious problem. He then collects samples from different factories, measures sizes, and shapes, and collects other data. On this basis, he proposed a unified standard for thread processing, which is the origin of the Whitworth thread BSW (British Standard Whitworth), which is also the world's first thread standard.

Although Whitworth threads are no longer common in nuts and screws, they have been superseded by the Uniform and Metric series. However, BSPP (British Standard Parallel Pipe) and 1:16 BSPT (British Standard Pipe Tape) were developed on this basis, and have now become international standards (ISO), which are still in use today.

A G is an abbreviation for gas (derived from the German Gawande, meaning "thread"), as it was originally used in natural gas pipeline systems. Thread G consists of internal and external threads for non-sealing connections. The implementing standard is BS EN ISO 228-1, while the old standard is BS 2779, which is no longer valid.

2. How to Determine the size of threaded pipe fittings

Okay, I believe you already understand the various types of pipe threads and how to measure them. You are welcome to continue to browse other content on our website, this website contains a lot of knowledge about malleable pipe fittings, it can be said to be a huge knowledge treasure, I believe you can get more knowledge from it. Of course, if you are interested in our products, you can leave your contact information, and our salesmen will give you professional answers.

What is the difference between ASME and ASTM?

The difference and specifications between mechanical tees and grooved tees